One defining characteristic of the leveraged loan market is how stubbornly low default rates have been, even at this late stage in the credit cycle. By the end of Q3 2019, the default rate in the US was 1.5%, according to the Fitch US Leveraged Loan Default Index. This had crept up slightly since earlier in the year, but is still below the non-recessionary 1.8% historical average.

These subdued default levels are the direct result of a decade of low interest rates as well as central banks' dovish policy in the face of economic red flags. Borrowers have enjoyed years of abundant low-cost financing, creating a global leveraged loan market worth an estimated US$3 trillion, according to the Bank for International Settlements.

At the same time, lender protections have eroded. By Q3 2019, 74% of loans in the US were cov-lite. In Europe, this reached 92%, the highest proportion on record, according to Debtwire Par/Xtract Research. 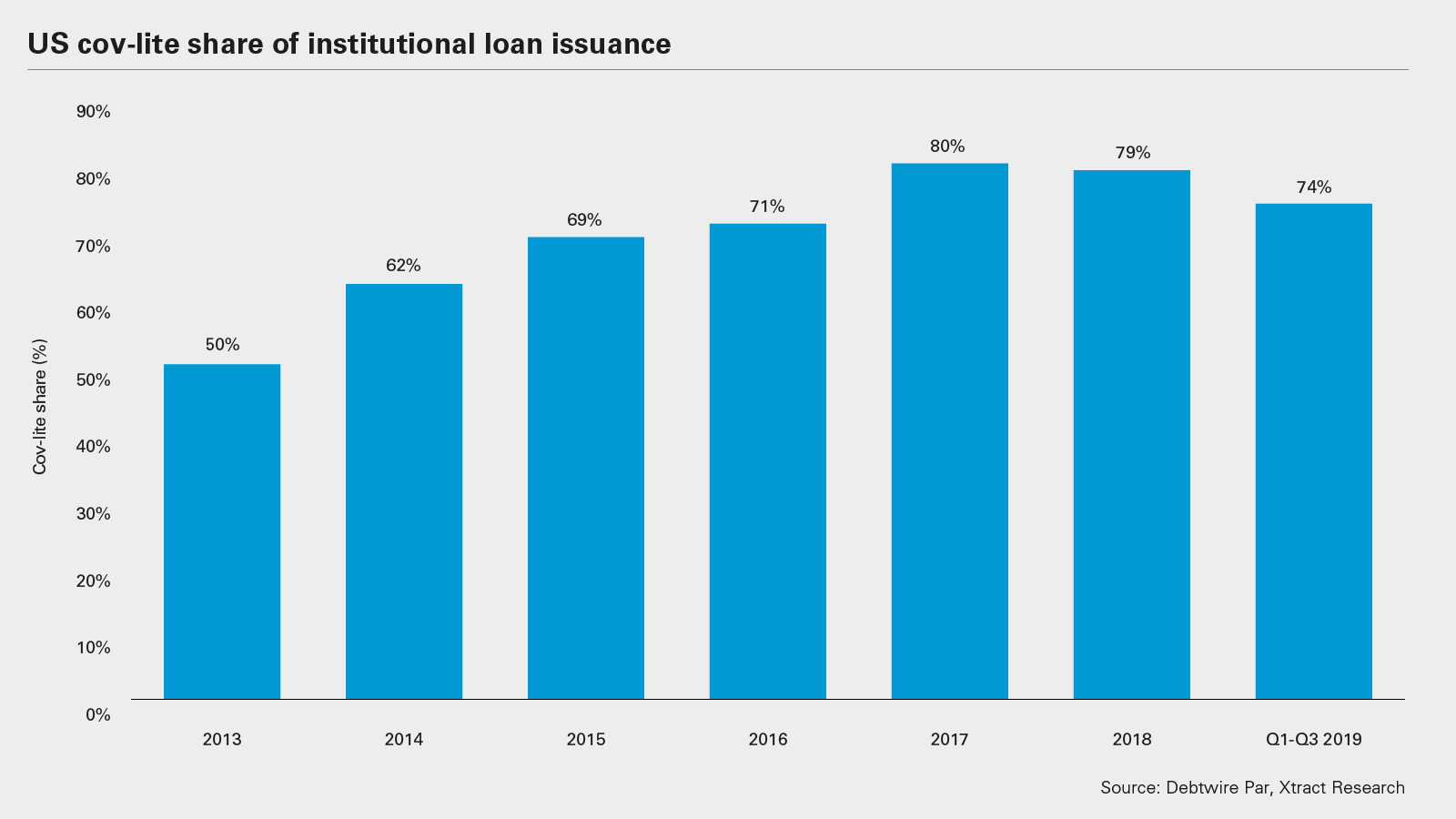 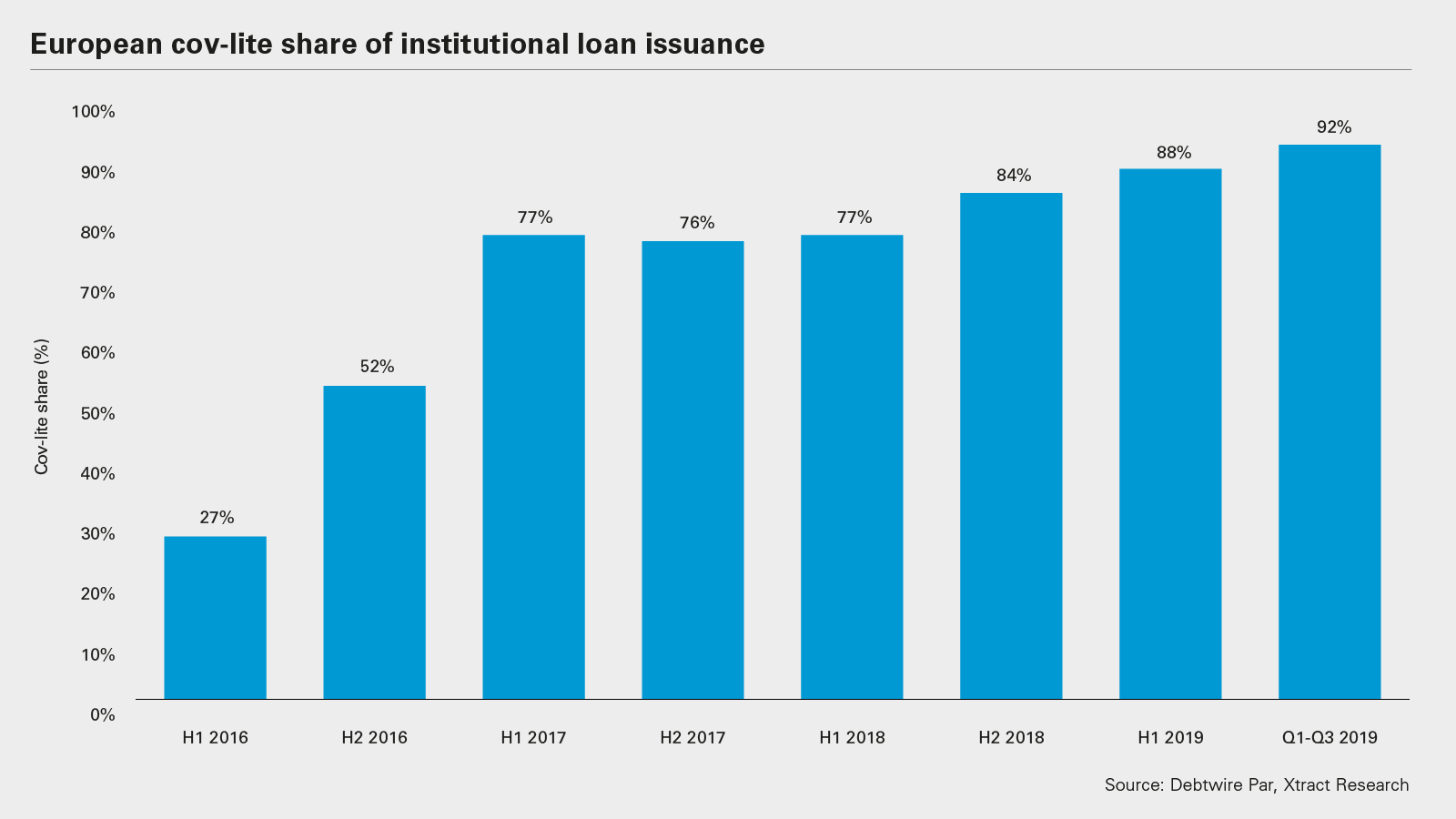 This means that most lenders lack early warning signs when the leverage ratios of their credits rise to unmanageable levels, unless covenants are incurred by a financial event such as a dividend issue, share buyback or M&A.

So far this has not been a major concern. Economies have remained relatively buoyant and companies have enjoyed the flexibility to refinance loans they have struggled to service, postponing what in some cases look like inevitable restructurings. But are cracks beginning to show?

The recent rise in defaults in the adjacent high yield bond market is one concern. As of the end of October, around US$29.5 billion in bonds from US issuers have defaulted, according to Fitch Ratings, which shows the trailing 12-month default rate now sits at 2.5%, climbing steadily from 1.5% since March.

Weaknesses have so far followed sectoral lines, where companies exposed to industry-specific disruption or consumer concentration risk falling victim to their debt burdens when their fortunes worsen. This is true for coal and oil, as well as retail, media and pharmaceutical companies. Downbeat earnings forecasts in the face of economic headwinds suggest we could begin to see more companies default and enter restructuring negotiations in the short to medium term.

The energy sector is a clear pressure point. Pacific Gas and Electric Company's default on its US$18 billion worth of bonds, the largest of the year, was the direct result of California's devastating wildfires. However, weak oil prices have had a sector-wide impact, causing Weatherford International to file for bankruptcy in July after succumbing to its US$10 billion in liabilities. Bondholders saw more than US$5.8 billion of the oil field servicing company's debt wiped out in its restructuring plan, which was approved in September.

Another telling sign is the action being taken by revolving credit facility (RCF) lenders, who typically retain the benefit of a financial maintenance covenant when investors otherwise forfeit protections in cov-lite scenarios. In some cases, these RCF lenders act on that early warning sign by calling the business to the negotiating table. In addition to amending the leverage ratio in the revised terms, they introduce several covenants to protect their downside in return for an extension of revolving credit terms.

Yet, despite concerns raised by policymakers (including the International Monetary Fund and the Bank of England) regarding the accumulation of risk in the leveraged loan market, investors remain relatively upbeat when looking ahead at default rates.

According to an S&P survey conducted in June 2019, only 17% of fund managers expect the higher historic average default rate to be reached in 2020, down from 25% who said the same in March. Similarly, only 58% now anticipate an uptick in defaults in 2021, versus the 75% in an earlier survey who said the same.

Nonetheless, the risks remain, and the only challenge is deciding when to make the right move. No one can put a precise date on a potential default and restructuring wave. For that reason creditors, lacking the maintenance covenants to trigger liquidity management transactions, may want to act now to limit their risk exposure. Of course, this may be easier said than done with the historically loose covenant protections in the latest wave of leveraged loan documents. Nonetheless, creditors would be well advised to carefully review credit terms and consider what options may be available to bring them to the negotiating table in advance of a potentially terminal payment default.

Similarly, financial sponsors would do well to engage with lenders early to negotiate mutually beneficial restructurings that see their portfolio companies proactively manage their liabilities before it's too late. By engaging with creditors at a relatively early stage, sponsors may be able to negotiate favorable debt extension or amendment terms, or even access new money from funds with readily accessible dry powder. Those who can use the current sponsor-friendly market to their advantage now will be better-positioned if and when the current cycle finally turns.

As the COVID-19 outbreak continues to escalate, ensuring wellbeing of employees is paramount, but it is not the only challenge. There is a vast sway of operational and legal issues that businesses must address, too.

Low prices and excess supply have pushed oil & gas balance sheets to the brink, which means raising traditional debt will remain difficult and restructurings are expected

Remote working, online shopping and telemedicine have shielded the technology sector from the worst effects of COVID-19 lockdowns

Healthcare sector under pressure but the prognosis looks good

COVID-19 has pushed healthcare systems around the world to the limit, but depending on the vertical, certain companies have been less affected than those in other sectors—and the availability of credit to battle the pandemic has helped